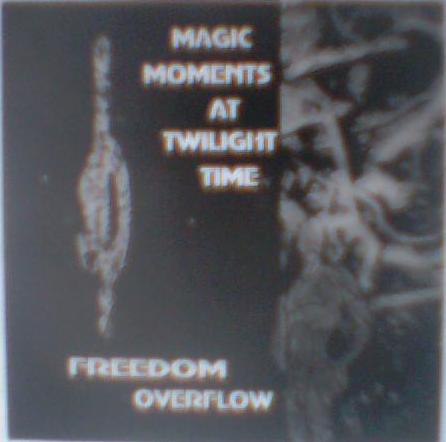 by
Magic Moments At Twilight Time

"Dr. Albert Michael Tron just walked into his Surrey living room one morning and discovered a small green alien (which he didn't know was actually him at the time) had re-wired all his musical equipment in a totally unexpected and psychotronic way. As if that wasn't trippy enough, when he started playing about with new sounds, Shona Moments, Kate Twilight and Jay Time came back from the future in the Ford Escortron to add that special something extra. I guess that's probably how most bands get together, huh?"

Freedom Overflow - Mick Magic and Lulu The Space Babe.
All the tracks with bits of Overflow radio broadcasts on their beginnings are from "White Hawk Atomic", that was Mick Magic, Lulu and Pete Program.
Older recordings (1987 and back) are any combination of Mick Magic, Shona Moments, Kate Twilight and Jay Time.

Mick Magic was kind enough to put together this album for Rodent Tapes. For further info and music from Magic Moments At Twilight Time use the links below..